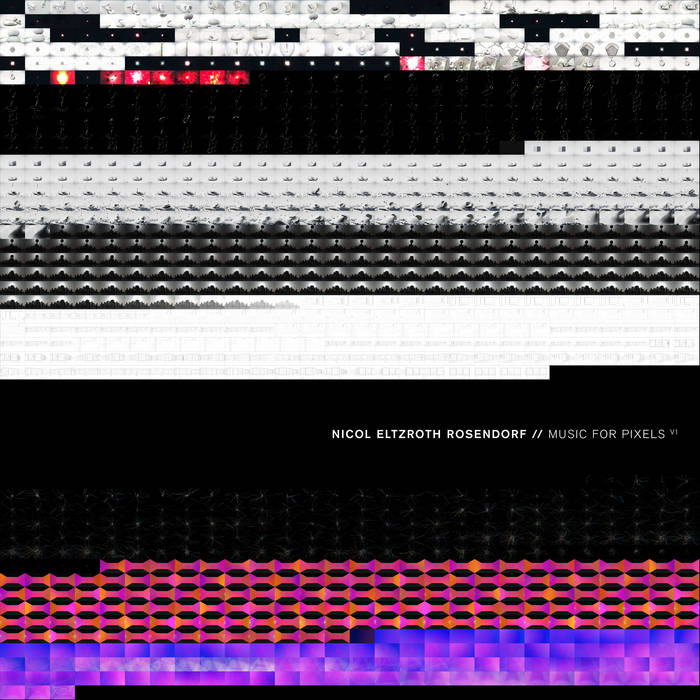 A compilation of sound and audio from my moving image art practice - 2014 to present. For more info, please visit nicoleltzrothrosendorf.com

When I was a child, I would lie in bed, unable to sleep. Through the open windows, I could hear crickets in the trees, the swelling and receding drone of cars on the busy street, and the rattly inhalation of the ceiling fan. Often, the sounds would intermingle, and a fourth sound would emerge, formed from those natural and mechanical elements but somehow being none of them. I would anticipate its arrival and try to focus on it while it was there, but it would eventually disintegrate back into its elements. It was a momentary aural chemical reaction, like hearing and feeling, rather than seeing, a ghost.

Music For Pixels originated within and arose from Nicol Eltzroth Rosendorf's Gordian, darkly astonishing moving image pieces produced between 2014 and 2022. In a tenebrous territory between drone, post-classical, dark ambient, and something unfathomable, the compositions are more than musical; something seismic, mega magnetic, perhaps quantum confounds the listener; there's more than what we hear here.

There is with each piece an endless approach as if a new planet is gradually taking shape, its surface coming into focus, yet as we approach, the sphere blurs and we find ourselves in a swirl of luminous gas, falling toward some invisible core. It overwhelms. A recognizable element, a dulcimer, for example, serves to remind us of the human on earth, even a specific place and time on the earth, but the forces closing in on it stretch us above the landscape, beyond what maps can mean, into the transhuman, perhaps the post-human. Each piece is inscrutable in its own way. Moments of sublimity grow, at the rate the moon rises, into a disorienting wave of sound, with something like a cosmic wind inhaled and exhaled across the pelagic soundscape. The energy core is straining at the edge of some cryptic machine and is even leaking out at points like a sudden pulse from an invisible sun, perhaps what atoms sound like from within. The form is there; something inheres but keeps seeming to be trying to give itself up. In a fiery foundry, audible frequencies combine to offer glimpses of some essential force, one we can see evidence of but can't contain:

Om, overtones, undertones, over-and-under tones, distortones crumbling the air between speaker and ear, simultaneously primordial and postordial but only momentarily ordial, the wavering of light on the surface of a tumultuous ocean, the collapsing of distant stars, a momentary glimpse of the architecture of a storm. Music for Pixels is at once both glorious and terrifying, intimate and disintegrating, an incantation and its incomprehensible results